Can a patent owner be enjoined from saying a product infringes? MYCO v. BLEPHEX 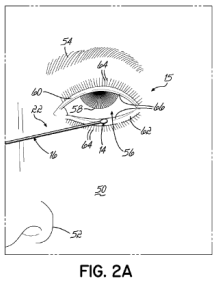 Can a patent owner be enjoined from saying a product infringes? MYCO v. BLEPHEX

Many patent owners are small inventors who have spent a significant amount of time in money perfecting their invention and getting it patented.  When a patent owner thinks that their patent is being infringed they become very passionate.  In the heat of passion a patent owner may publicly criticize the alleged infringer and tell potential customers that if the customer buys the infringing product they are also committing patent infringement.  This can cause the alleged infringer lost sales and financial harm which becomes very bothersome if it turns out later that patent infringement has not occurred.

MYCO INDUSTRIES, INC. v. BLEPHEX, LLC, 19-2374 (C.A.F.C. 2020) is a case which revolves around this question.  The patent owner in this case is  BlephEx who owns U.S. Patent No. 9,039,718 (the “’718 patent”) which relates to the treatment of an eye infection.  In August 2012, after filing a patent application, Dr. James Rynerson, contacted John Choate.  The men entered into a partnership. Choate agreed to help develop a commercial product based on the electromechanical device disclosed in the ’718 patent.  A product based on the ‘718 patent was brought to market in 2013.  In January 2014, the partnership ended on poor terms.  Sometime later, Choate became
chairman of Myco Industries.

In 2019 both companies attended an optometry trade show in New Orleans.  Myco was selling a device similar to the one patented by Rynerson, however to treat a slightly different ailment. According to Choate, Rynerson made loud accusations of patent infringement within earshot of prospective customers, while videotaping at least part of the encounter on his cell phone.  Rynerson claims that he did not threaten to sue anyone for patent infringement and was only looking to gain information about the Myco product because he thought that it looked very similar to
his patented product.

In March 2019, Myco filed a declaratory judgment action against BlephEx seeking a judgement of non infringement.   Myco filed a motion for a preliminary injunction, seeking to bar BlephEx from (1) “Making false allegations that Myco is infringing the ’718 patent” and; (2) “making baseless threats against Myco’s potential customers.” The district court granted Myco’s motion for a preliminary injunction to enjoin BlephEx from making allegations of patent infringement and also from threatening litigation against Myco’s potential customers.

BlephEx appealed the preliminary injunction to the Court of Appeals for the Federal Circuit.  The Federal Circuit noted that when a preliminary injunction prevents a patent owner from communicating its patent rights, a court applies “federal patent law and precedent relating to the giving of notice of patent rights.”    Further, federal law requires a showing of bad faith before a patent owner can be enjoined from communicating his patent rights.

The Federal Circuit ultimately concluded that the District Court abused its discretion when it granted a preliminary injunction without a finding of bad faith on the part of BlephEx.   The Federal Circuit vacated the preliminary injunction because the District Court expressly declined to find that any of BlephEx’s statements were either false or misleading.

Can a patent owner be enjoined from saying a product infringes? MYCO v. BLEPHEX was last modified: April 5th, 2020 by emc_uspatentlaw