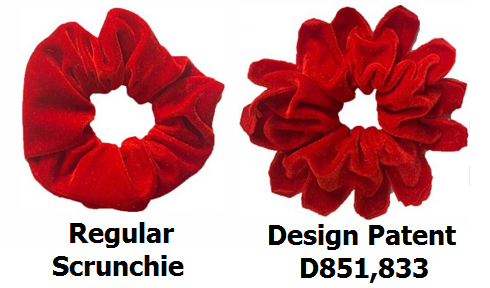 A patent is a set of exclusive rights granted to the inventor of an invention that meets certain criteria.  Utility patents are what most people think of when they use the term patent.  However the design of an article of manufacture can also be protected by a design patent.

The United States Patent and Trademark Office (USPTO) examines applications and grants patents on inventions when applicants are entitled to them. The patent law provides for the granting of design patents to any person who has invented any new, original and ornamental design for an article of manufacture. A design patent protects only the appearance of the article and not structural or utilitarian features.

SHANDONG HONGHUI FOOD MACHINERY CO., LTD. v. WOULDN’T IT BE NICE LLC, 2:19-cv-07347 (C.D.CA 2019) is an example of a company accused of patent infringement requesting a declaratory judgement of non-infringement.  The plaintiff in this case is a seller of velvet hair scrunchies and retails these products through e-commerce sites.  The defendant in this case holds United States Design Patent No. D851,833.  Examples of products from both the plaintiff and the defendant are reproduced above.

At first glance it seems like the defendant will have a difficult time defending itself.  There are differences between the accused product and what is described in the design patent.  We will have to wait and see how the defendant responds in its answer.