DANK found to be merely descriptive, brewery denied trademark registration. IN RE SWEETWATER 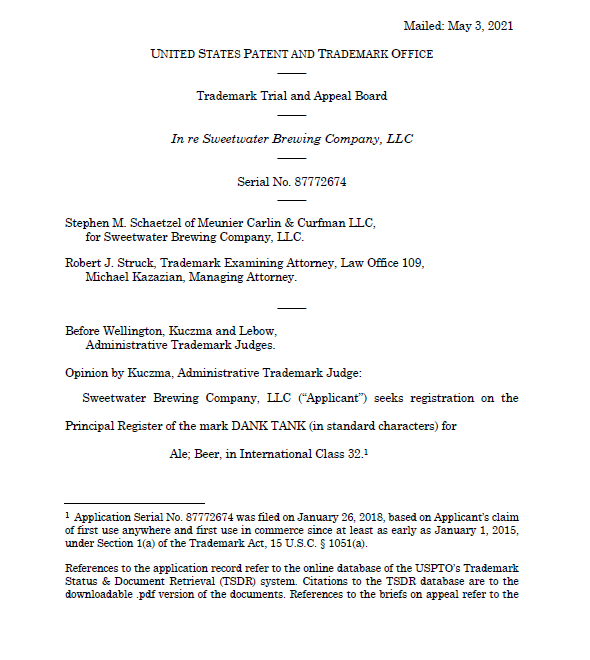 DANK found to be merely descriptive, brewery denied trademark registration. IN RE SWEETWATER

A trademark is a something that a manufacturer uses to signal to consumers that the manufacturer is the source of a product.  A trademark is traditionally a symbol, word or phrase, but a trademark can also be a color, sound or smell.  If a something creates an association in the mind of a consumer between a product and the identity of the manufacturer of the product, that can be considered a trademark.  Trademark law in the United States is a hybrid of state and federal laws.  A trademark owner can register their trademark with the United States Patent and Trademark Office to strengthen their trademark, but registration is not required to start using a trademark to brand goods.

How can a trademark applicant overcome a refusal to register a trademark the United States Patent and Trademark Office deems merely descriptive?  With evidence of secondary meaning which demonstrates the trademark has acquired distinctiveness.

IN RE SWEETWATER BREWING CO, LLC, Serial No. 87772674 (TTAB 2021) is an example of a trademark application which was denied becase a term was found to be merely descriptive.

The Trademark Examining Attorney refused registration of Applicant’s mark for failure to comply with a disclaimer requirement, under Sections 2(e)(1) and 6(a) of the Trademark Act, for the wording “DANK”.  The examining attorney found that “DANK” merely describes a feature, purpose or characteristic of Applicant’s products.  Specifically the examining attorney the found that when used in connection with beer, the term DANK means ‘sticky, juicy, very pungent and of a high level’ and ‘very hoppy, cloudy IPAs with high alcohol content and flavors with a very funky taste.’ The case was appealed to the Trademark Trial and Appeal Board.

The TTAB noted that an applicant may not claim exclusive rights to terms that others may need to use to describe their goods and/or services in the marketplace.  Whether a mark is merely descriptive must be made in relation to the goods for which registration is sought, not in the abstract or on the basis of guesswork.  Evidence submitted to the TTAB showed the term “DANK” being used by multiple third-parties involved in promoting and reviewing products in the ale and beer industry, on their websites and in online articles directed to potential customers, to descriptively refer to the taste of certain ales and beers.

Applicant argued that ‘DANK TANK’ was suggestive because customers must apply multiple mental steps, first associating the term ‘tank’ with a beverage and then associating the unitary mark ‘DANK TANK’ with a particular beverage (beer, ale).  The TTAB found that the evidence submitted indicated that the public considered DANK a description of flavors and aromas.

The TTAB affirmed the refusal however if the applicant filed a disclaimer of the term DANK, as originally requested by the examining attorney, the application would proceed to publication.

DANK found to be merely descriptive, brewery denied trademark registration. IN RE SWEETWATER was last modified: July 2nd, 2021 by emc_uspatentlaw