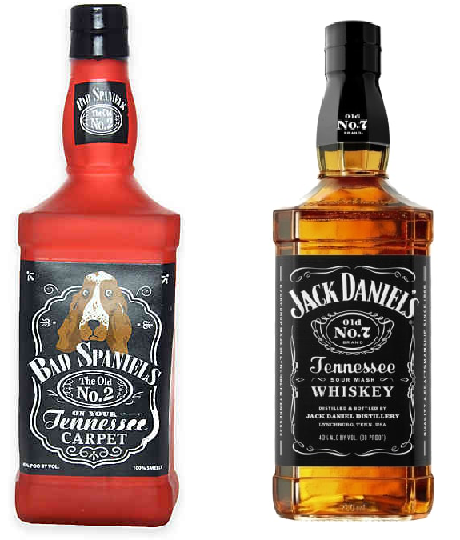 The rights granted to a trademark owner are relatively broad, however there are some limits.  In general, claims of trademark infringement under the Lanham Act are governed by a likelihood-of-confusion test, which seeks to
strike the appropriate balance between the general public’s freedom of expression and trademark rights. The likelihood-of confusion test requires that the plaintiff have a valid, protectable trademark and defendant’s use of the mark is likely to cause confusion.

However, when artistic expression is at issue, however, the general likelihood-of-confusion test “fails to account for the full weight of the public’s interest in free expression.” To balance public interests courts have held that the Lanham Act only applies to expressive works if the plaintiff establishes one of the two requirements in the test set forth in Rogers v. Grimaldi, 875 F.2d 994 (2d Cir. 1989).  Rogers requires the plaintiff to show that the defendant’s use of a trademark is either (1) “not artistically relevant to the underlying work” or (2) “explicitly misleads consumers as to the source or content of the work.”

VIP PRODUCTS V. JACK DANIEL’S PROPERTIES, 18-16012 (9th Cir 2020) is a case which applies the Rogers test to a trademark dispute between a dog toy manufacturer and a liquor company.

VIP Products sells the “Bad Spaniels Silly Squeaker” dog toy, which is reproduced above on the left.  The toy resembles a bottle of Jack Daniel’s Old No. 7 Black Label Tennessee Whiskey, which is reproduced above on the right.  The toy has light-hearted, dog-related alterations. For example, the name “Jack Daniel’s” is replaced with “Bad Spaniels,” “Old No. 7” with “Old No. 2,” and alcohol content descriptions with “43% POO BY VOL.” and “100% SMELLY.” After Jack Daniel’s Properties, Inc. (“JDPI”) demanded that VIP cease selling the toy, VIP filed this action, seeking a declaration that the toy did not infringe JDPI’s trademark rights or, in the alternative, that Jack Daniel’s trade dress and bottle design were not entitled to trademark protection. JDPI counterclaimed, asserting trademark infringement and dilution. After ruling on cross-motions for summary judgment and conducting a four-day bench trial, the district court found in favor of JDPI and issued a permanent injunction enjoining VIP from manufacturing and selling the Bad Spaniels toy.  VIP appealed the district court’s ruling to the Court of Appeals for the Ninth Circuit.

The Ninth Circuit concluded that the Bad Spaniels dog toy was an expressive work.  Because Bad Spaniels is an expressive work, the district court erred in finding trademark infringement without first requiring JDPI to satisfy at least one of the two Rogers prongs.  Based on this finding the Ninth Circuit vacated the district court’s finding of trademark infringement and the injunction.