Medical test monitoring patent rejected because it was directed to an abstract idea. IN RE: GALE 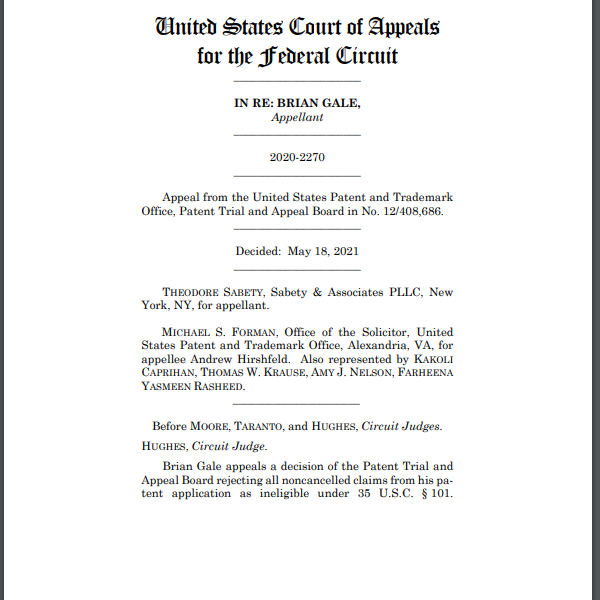 Medical test monitoring patent rejected because it was directed to an abstract idea. IN RE: GALE

United States Patent Law §35 U.S.C. 101 articulates eligible subject matter.   A patent can be granted on any new and useful process, machine, manufacture, or composition of matter, or any new and useful improvement thereof.  There are also some judicially created exceptions to patent eligible subject matter, namely, laws of nature, physical phenomena, and abstract ideas.

Computer software was tricky subject for patent law.  For several decades the USPTO and courts had trouble articulating exactly when computer software was eligible for patent protection.  The United States Supreme Court articulated the present test to determine if computer software is eligible for patent protection in Alice Corp. Pty. Ltd. v. CLS Bank Int’l, 573 U.S. 208 (2014) .  The first step in the Alice test is to determine whether the claims of the patent are directed to a patent-ineligible concept, like an abstract idea.  If the first step is true, then each patent claim is reviewed both individually and ‘as an ordered combination’ to determine whether the additional elements ‘transform the nature of the claim’ into a patent-eligible application.  The Alice test can be confusing, therefore it is helpful to study case law to gain a better understanding of how courts will apply the test.

Claim 1 of the application describes a method in which a computer system: (1) receives critical test result messages with associated timing-related metadata, (2) reads the timing-related metadata, (3) calculates a usage pattern from the metadata, and (4) determines whether the calculated usage pattern is compliant by comparing it to a predetermined usage pattern requirement. The PTAB found that the claims of the ’686 application were ineligible under 35 U.S.C. § 101 because they were directed to an abstract idea without significantly more.  The applicant appealed the the Court of Appeals for the Federal Circuit.

Medical test monitoring patent rejected because it was directed to an abstract idea. IN RE: GALE was last modified: June 2nd, 2021 by emc_uspatentlaw