Patent for air tight container rejected as obvious. IN RE: CSP TECHNOLOGIES 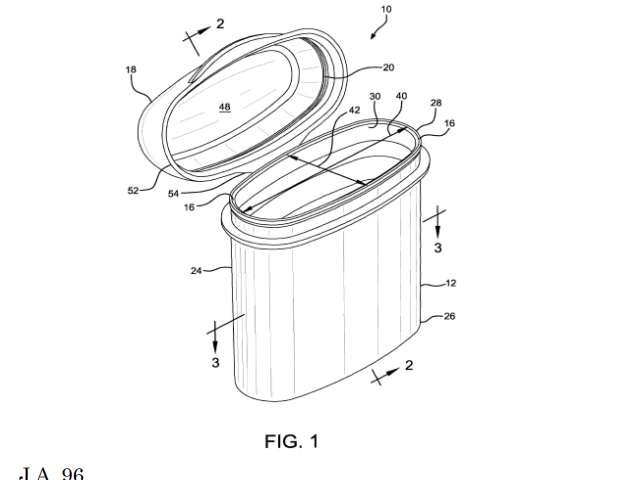 Patent for air tight container rejected as obvious. IN RE: CSP TECHNOLOGIES

Obviousness under 35 U.S. Code § 103 is a question of law based on underlying findings of fact. Those underlying findings of fact include: (1) “the scope and content of the prior art,” (2) “differences between the prior art and the claims at issue,” (3) “the level of ordinary skill in the pertinent art,” and (4) the presence of evidence of secondary considerations, such “as commercial success, long felt but unsolved needs, failure of others,” and unexpected results.

Whether an invention is obvious is an objective test based on the prior art and a person having ordinary skill in that art.  Prior art is the sum of all knowledge in a given field of technology.  Research papers, granted patents, patent applications, and other forms of printed publications are all examples of prior art.  The person of ordinary skill in the art is a hypothetical person who is presumed to have known the relevant art at the time of the invention.

Whether or not an invention will be found obvious can be a complicated analysis therefore it is helpful to review case law to better understand how courts apply the obviousness standard.

CSP Technologies submitted U.S. Patent Application No. 12/992,749 in 2012.  The ’749 application discloses a “moisture proof, resealable non-cylindrical container and lid assembly” that can be used to “house test strips, pills, capsules, particulate materials, liquids, or other objects or materials and control the ingress and/or egress of moisture.” The body of the container “has a generally tubular sidewall” and a “non-round body sealing surface,” and the container’s lid includes a “lid sealing surface” and is “configured to seat on the body.”

The patent examiner rejected the application under 35 U.S.C. § 103 as being unpatentable over Giraud (U.S. Patent No. 7,059,492), Hagen (U.S. Patent Pub. No. 2003/0133847 A1), and further in view of Moon (U.S. Patent No. 2,727,547).  Giraud discloses a moisture proof, resealable non-cylindrical container and lid assembly that may be “used to hold a pharmaceutical product such as pills or glucose test strips.”  Hagen discloses a container that has a “substantially air and moisture tight seal” and “a housing made of a cover and a base configured to retain a plurality of test strips.”  Moon discloses a “leak proof, water resistant and reusable” container with a flip-top lid that can be used for carrying medical supplies.

The Examiner determined that it would have been obvious to a person of ordinary skill in the art to modify Giraud’s container with the configuration of test strips taught in Hagen because “such a configuration allows for easy manipulation of individual test strips.”  The Patent Trial and Appeal Board (PTAB) affirmed the examiner’s rejection and CSP Technologies appealed to the Court of Appeals for the Federal Circuit.

On appeal, CSP argued that there was no rational apparent reason why a person of ordinary skill would have combined Giraud and Hagen because Giraud did not disclose the problem of removing  test strips. A conclusion of obviousness cannot be overcome by attacking prior art individually when a rejection is based upon combination. Because Hagen disclosed the problem, the combination of Hagen and Giraud made the invention obvious.  The Federal Circuit affirmed the PTAB’s decision because found that substantial evidence supported the PTAB’s finding that a person of ordinary skill in the art would have modified Giraud in view of Hagen to arrive at the claimed container.

Patent for air tight container rejected as obvious. IN RE: CSP TECHNOLOGIES was last modified: January 30th, 2021 by emc_uspatentlaw