Patent on golf club head found to be invalid because it was indefinite. SASO GOLF v. NIKE 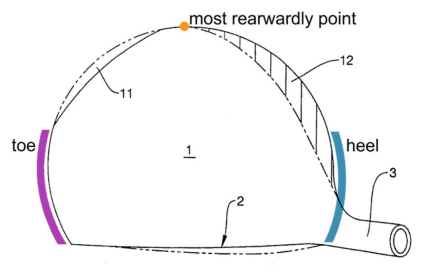 Patent on golf club head found to be invalid because it was indefinite. SASO GOLF v. NIKE

A patent is a complicated document with several different sections.  The specification section of the patent describes the all elements of an invention.  All patent specifications shall conclude with one or more claims particularly pointing out and distinctly claiming the subject matter which the inventor or a joint inventor regards as the invention. 35 U.S.C. § 112(b).  Elements of an invention can be described in a specification, but if those elements are not claimed then the patent does not cover those elements. The claims of a patent are like property lines on a map. Claim language must be “definite” to comply with 35 U.S.C. 112(b).

The primary purpose of 35 U.S.C. 112(b) is to ensure that the scope of the claims is clear so the public is informed of the boundaries of the claims of a patent and what constitutes infringement of the patent.  A patent claim is indefinite if it fails to inform a person having ordinary skill in the art about the scope of the invention, with reasonable certainty.  Reasonable certainty does not require absolute or mathematical precision.  However case precedent has found patent claims to be indefinite when there is more than one way to measure a physical characteristic and the patent specification does not disclose how the inventor is measuring.

SASO GOLF, INC. v. NIKE, INC, 20-1456 (C.A.F.C. 2021) is an example of a case where a patent was found to be indefinite because the position to measure the curvature of a golf club head was not explained in the patent.

Defendant is a retailer of various different sports products including golf clubs.  Plaintiff sued Defendant for
infringing the ‘495 patent.  At trial both sides presented experts to explain how a person having ordinary skill in the art would interpret the patent.  Plaintiff’s expert testified that the edges of the toe and heel were irrelevant.  Defendant’s expert testified that the patent did not adequetly define where on the toe and heel a measurement should be made to determine the radius of curvature.

The U.S. District Court for the Northern District of Illinois held the claim invalid due to indefiniteness.  The court reasoned that the location on the toe and heel, used to measure radius of curvature, was unclear. Plaintiff then appealed to the Court of Appeals for the Federal Circuit.

On appeal Plaintiff’s primary argument was that measurement locations were based on expert testimony, and the credibility of an expert witness is a question for a jury.  The Federal Circuit noted that meaning of a patent term is a question for the judge, even though some of the questions underlying claim construction may involve credibility determinations.

The Federal Circuit found that choosing precise points from which to measure the radii of curvature is essential to knowing whether a golf club infringes the ’495 patent. The district court’s judgement was affirmed because it did not clearly err in its findings that the patent provided no guidance on where to locate the points (the toe and heel) and that an artisan would not know specific definitions for those areas.

Patent on golf club head found to be invalid because it was indefinite. SASO GOLF v. NIKE was last modified: February 18th, 2021 by emc_uspatentlaw