Prosecution history of prior art helps save a patent from anticipation. INTEX v. TEAM WORLDWIDE 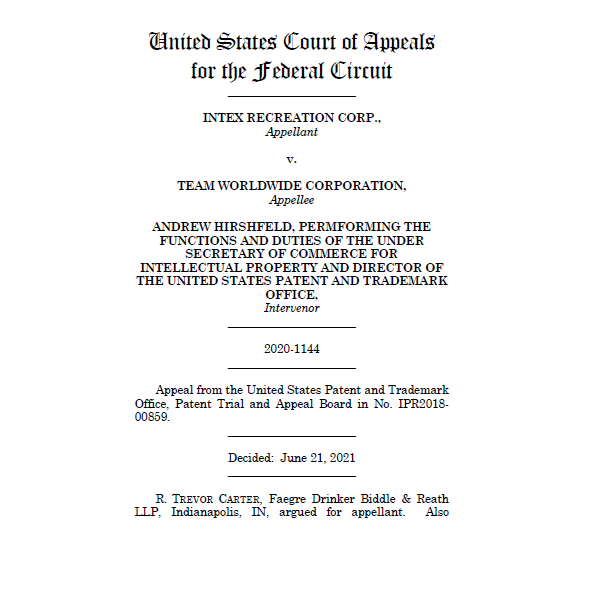 Prosecution history of prior art helps save a patent from anticipation. INTEX v. TEAM WORLDWIDE

After a patent has issued it can still be invalidated. One of the ways a patent can be invalidated is through Inter partes review. IPR is a proceeding conducted at the Patent Trial and Appeal Board to review the patentability of one or more claims in a patent only on a ground that could be raised under §§ 102 or 103, and only on the basis of prior art consisting of patents or printed publications.  The inventor and the patent examiner do their best to consider all the relevant prior during the patent application process, but sometimes relevant prior art is overlooked.  If a member of the public discovers a piece of prior art which anticipates a patent which has been granted they may request an IPR of the patent.  IPR can result in invalidation of some or all of the claims of a patent.

Because inter partes review will only be granted on very narrow grounds it is important to understand the precise meaning of each ground. A claim is anticipated only if each and every element of a claim is found, either expressly or inherently described, in a single prior art reference. Whether or not a patent is anticipated by a piece of prior art anticipates a patent depends on how the claims of the patent are constructed.   Claim construction is reviewed on appeal under the “broadest reasonable interpretation” standard.  Claim construction is a determinations of law reviewed de novo where based on intrinsic evidence, with any findings about facts extrinsic to the patent record reviewed for substantial-evidence support.

The concept of anticipation can be tricky to understand so it is useful to study case law to learn how courts apply the law.

INTEX RECREATION CORP., v. TEAM WORLDWIDE CORP, 2020-1144 (C.A.F.C. 2021) is a case where the prosecution history of a piece of prior art meant it did not anticipate the patent under review.

On March 30, 2018, Petitioner filed a petition for IPR of the ’018 patent on several grounds including anticipation based on U.S. Patent No. 5,564,963 by Chan. Chan was filed on September 2, 1993, issued on October 15, 1996, and is titled “Air-Cushioned Toy.”  The toy includes a platform that sits on top of a pillow. According to Chan, the toy uses a motorized fan to draw air into the pillow, which in turn expels the air through perforations on the bottom surface of the pillow, enabling a child lying on it to “hover.”

The parties disagreed on the meaning of the term, inflatable body. The PTAB construed it to mean “a substantially airtight structure that expands when filled with air or other gases”. Petitioner claimed that interpretation was too narrow and appealed the PTAB’s decision to the Court of Appeals for the Federal Circuit.

The Federal Circuit noted that a statement during prosecution limits a claim where it constitutes a clear and unmistakable disavowal of claim scope.  During the prosecution of Chan the examiner rejected certain claims, stating that U.S. Patent No. 5,068,933 (“Sexton”) met the claim limitation, “inflatable body.”  The applicant responded saying that the cloth pillow case of Sexton  is not substantially airtight and would not in and of itself expand when filled with air.  The Federal Circuit also pointed out that context is important when determining the scope of a claim.  Chan expressly gave a definition for an inflatable body to over come a rejection, the examiner accepted that definition and allowed the patent. Based on this, the Federal Circuit affirmed that Chan failed to disclose an inflatable body and therefore did not anticipate the ‘018 patent.

Prosecution history of prior art helps save a patent from anticipation. INTEX v. TEAM WORLDWIDE was last modified: July 3rd, 2021 by emc_uspatentlaw