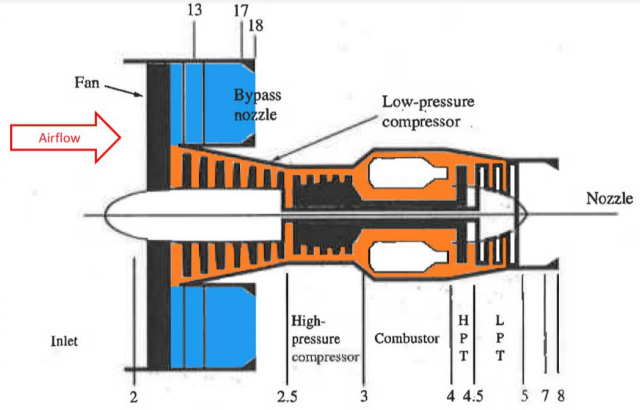 Once a patent is granted, the patent is not immune from review.  If a member of the public discovers prior art which would anticipate (35 U.S.C. §102) or render a patented invention obvious (35 U.S.C. §103), that member of the public can request an inter partes review (IPR).   IPR is a trial proceeding conducted at the Patent Trial and Appeal Board (PTAB) to review the patentability of one or more claims in a patent.  The evidence that can be submitted in an IPR is limited to patents or printed publications which would qualify under §§ 102 or 103 and expert testimony to explain those publications. At the conclusion of an IPR the PTAB may invalidate all, some or none of the claims of the patent.

In 2011, Raytheon applied for the patent that was issued as U.S. Patent Number 8,695,920, entitled “Gas Turbine Engine with Low Stage Count Low Pressure Turbine.” The invention relates to an engine mounting configuration for the mounting of a turbofan gas turbine engine to an aircraft pylon.  The key feature of the invention claimed in the ‘920 patent is a dual stage compressor that has a low pressure stage followed by a high pressure stage, as illustrated in the drawing above.

In December 2016, GE petitioned the PTAB for inter partes review of  ’920 patent on the grounds that the patent was obvious based on the combination of two prior art references, Wendus and Moxon.

Wendus – Follow-On Technology Requirement Study for Advanced Subsonic Transport, by Bruce E. Wendus – is a research paper by four employees of Raytheon subsidiary Pratt & Whitney, published internally in August 1995 before being publicly distributed as a NASA “contractor report” in August 2003.  Wendus discloses all most of the elements of the ‘920 patent except that it teaches a one-stage high-pressure turbine instead of the “at-least-two-stage” turbine of the ‘920 patent.

Moxon is a July 1983 magazine article – How to Save Fuel in Tomorrow’s Engines, by Julian Moxon- published in an aviation magazine.  Moxson discusses how to improve fuel efficiency in a turbo fan engine and concludes that future turbo fan engine designs that have one, instead of two, high pressure turbine stages is thought unlikely, but designs have been carried out.

The PTAB found the invention to be not obvious.  The PTAB found that Wendus considered a one-stage turbine superior to a two-stage turbine, therefore this taught away from the ‘920 patent. The PTAB that GE did not provide a persuasive motivation or justification for why a person of ordinary skill in the art, when modifying the Wendus engine to include a two-stage high pressure turbine, would arrive at the turbine claimed in the ‘920 patent.  GE appealed this decision to the Court of Appeals for the Federal Circuit.

The Federal Circuit held that the PTAB’s decision was not supported by substantial evidence.  A reference does not teach away ‘if it merely expresses a general preference for an alternative invention but does not “criticize, discredit, or otherwise discourage” investigation into the invention. Wendus did not criticize a dual stage turbine, it merely expressed a preference for a single stage turbine.  The PTAB’s conclusion that a PHOSITA would not combine Wendus and Moxon was based on the erroneous conclusion that Wendus taught away.  The Federal Circuit also noted that GE was not required a PHOSITA would be motivated to combine each element described in Moxson and Wendus, the fact the prior art discloses a desirable parameter and there is a reasonable expectation that the combined parameters will succeed is sufficient motivation.  The Federal Circuit vacated the PTAB’s decision and remanded the case for further proceedings.