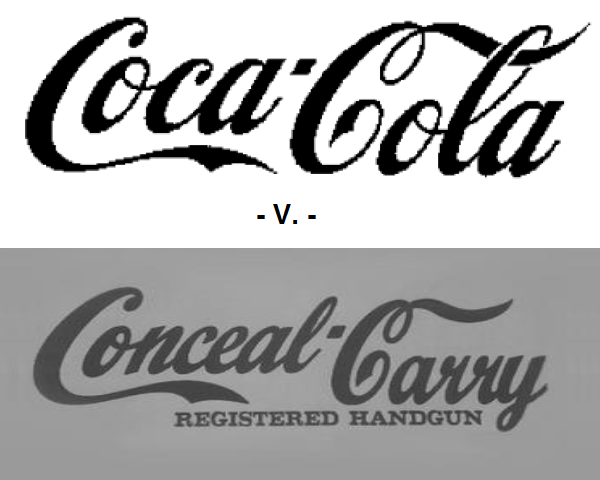 Dilution by blurring is ‘association arising from the similarity between a mark or trade name and a famous mark that impairs the distinctiveness of the famous mark.’ Trademark Act Section 43(c)(2)(B). Dilution may be likely regardless of the presence or absence of actual or likely confusion, of competition, or of actual economic injury.

The Coca-Cola Company v. Robert Troy Hoff, Opposition No. 91244286 (TTAB 2021) is an example of a trademark application which was denied because it would dilute an already registered trademark.

This case begins when the applicant filed Application Serial No. 87822744 on March 6, 2018. Applicant says his trademark consists of the stylized words ‘CONCEAL-CARRY’ positioned directly above the stylized words ‘REGISTERED HANDGUN’.  An example of applicant’s mark is reproduced above.  Applicant sought to register the stylized mark shown on the bottom of the above image for “Hats; Hoodies; Jackets; Jerseys; Sweaters; T-shirts; Graphic T-shirts; Short-sleeved or long sleeved-t-shirts; Sports jerseys,” in International Class 9.

Opposer is an internationally known soft drink manufacturer.  Opposer’s trademark is reproduced above.  Opposer asserted both likelihood of confusion and likelihood of dilution as reasons why applicant’s trademark should be refused registration.

The Trademark Trial and Appeal Board sustained the opposition because it found that dilution of the Coca-Cola Script trademark was proven by a preponderance of the evidence.  The TTAB found that Opposer’s trademark qualified as a famous trademark.  The Opposer was using its trademark before the Applicant.  The similarities between the two trademarks was likely to dilute the Opposers trademark. And finally that there were countless ways in which Applicant could have displayed the words “Conceal Carry” on his goods to communicate his claimed messages regarding gun rights, but he chose to display those words in a script that we have found above immediately conjures up the famous Coca-Cola Script.  Based on these findings Applicant’s trademark was denied registration.