When is summary judgement appropriate in a design patent case? SPIGEN v. ULTRAPROOF 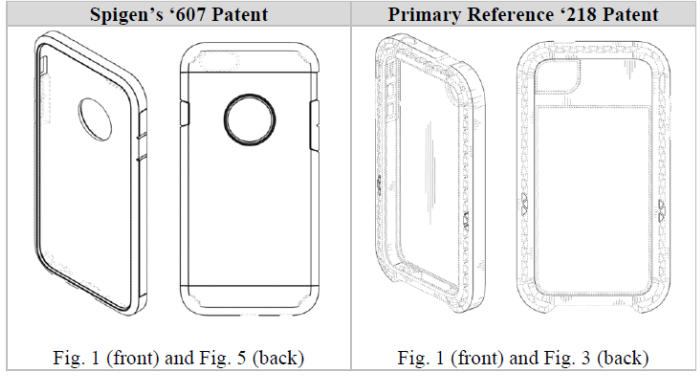 When is summary judgement appropriate in a design patent case? SPIGEN v. ULTRAPROOF

A design patent shares the concept of obviousness with utility patents, i.e. if the design is obvious in light of the prior art it cannot be patented.  For design patents, the ultimate inquiry for obviousness “is whether the claimed design would have been obvious to a designer of ordinary skill who designs articles of the type involved.”  This inquiry is a question of law based on underlying factual findings.

Design patent infringement cases are subject to the Federal Rules of Civil Procedure like any other case being tried in Federal Court.  If the plaintiff or defendant feels that the law and the facts are clearly in their favor they can ask the judge to enter a verdict in their favor prior to trial.  When a design patent defendant believes that the patent they are accused of infringing is obvious, they can motion for summary judgement in their favor.

Summary judgment of obviousness is appropriate if “the content of the prior art, the scope of the patent claim,
and the level of ordinary skill in the art are not in material dispute, and the obviousness of the claim is apparent in light of these factors.” MRC Innovations, Inc. v. Hunter Mfg., LLP, 747 F.3d 1326, 1331 (Fed. Cir. 2014). Design patents are presumed valid and, thus, a moving party seeking to invalidate a design patent at summary judgment must submit such clear and convincing evidence of facts underlying invalidity that no reasonable jury could find otherwise. See Ethicon Endo-Surgery, Inc. v. Covidien, Inc., 796 F.3d 1312, 1328 (Fed. Cir. 2015).

SPIGEN KOREA CO., LTD. v. ULTRAPROOF, INC. 19-1435 (C.A.F.C. 2020) is a case where summary judgement for obviousness was originally granted by the trial court, but that decision was reversed on appeal.   This case revolves around a design patent for a cellphone case.

Plaintiff in case owns owns several design patents which each claim a case for a cellular phone. U.S. Design
Patent Nos. D771,607 (“the ’607 patent”), is reproduced above on the left.  Plaintiff accused Defendant of infringing on the design patent.

Defendant responded the the complaint by claiming the ‘607 patent was obvious in light of the prior art. Defendant cited,  U.S. Design Patent No. D729,218 (“the ’218 patent”) as a primary reference, which is reproduced above on the right.  Defendant moved for summary judgement which was granted by the trial court.  Plaintiff appealed to the Cour of Appeals for the Federal Circuit.

The Federal Circuit explained that a trial court is not free to find facts at the summary judgment phase.   If a reasonable jury could find in favor of the non-moving party, a trial court must deny summary judgment of obviousness.  Plaintiff introduced expert testimony that the ‘607 patent and the ’218 patent were not basically the same.  Because there was an issue of material fact, summary judgement was premature.

When is summary judgement appropriate in a design patent case? SPIGEN v. ULTRAPROOF was last modified: April 18th, 2020 by emc_uspatentlaw